44. A while back, this meme caught my attention: 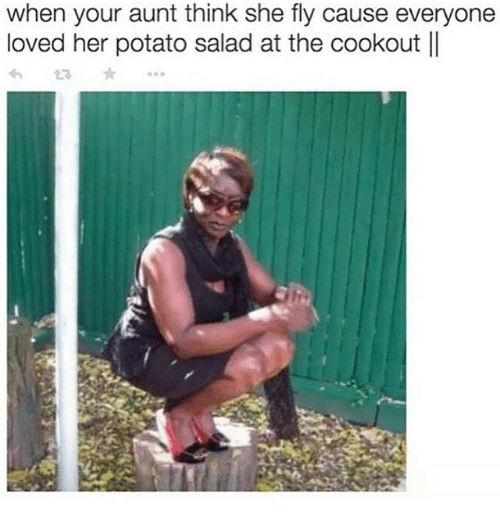 I’m not sure why this struck me, but it made me laugh out loud, a literal lol. It also got me thinking about potato salad. Turns out, there’s a cottage industry out there devoted to potato salad memes. Google “aunt potato salad meme” and see it for yourself. Here’s a sampling: 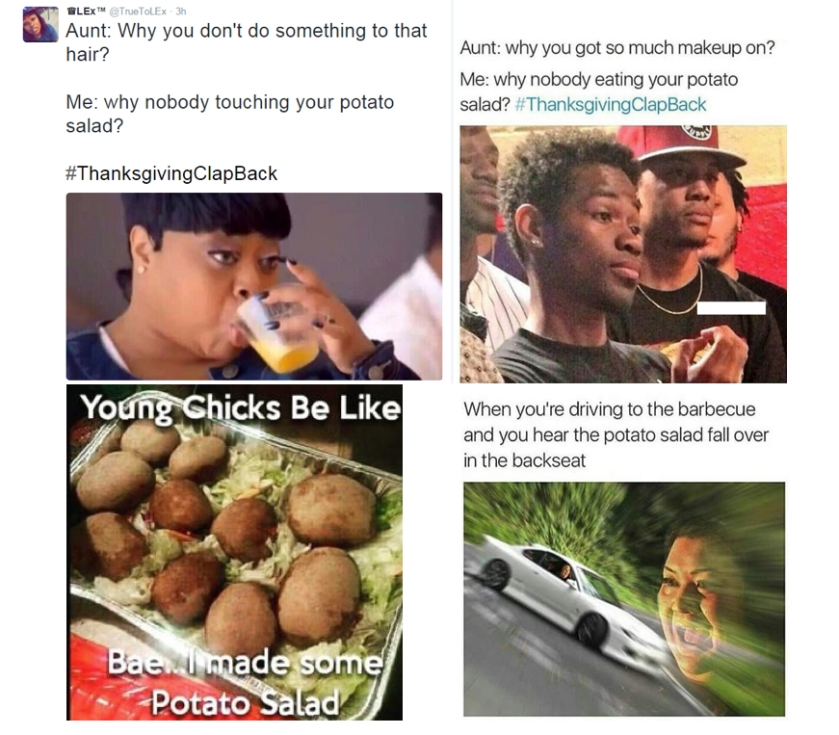 Then I started seeing potato salad humor popping up in other places. Michael Twitty, for instance, who is an Actual Food Scholar, came up with a list of forty items in his “How to Survive Black Thanksgiving as a Non-Black Guest.” He mentions Shanda’s boyfriend, of course, whom we’re all happy to see. But that’s only #30. He elevated the Potato Salad Issue to #6:

6.  Potato salad year round is a thing. Don’t ask who made it, just know their hands are clean. Potato salad is yellow, has paprika and eggs so don’t be confused.

In a similar vein, Michael Harriot put together “The Caucasian’s Guide to Black Barbecues,” introducing us to Tasha’s new boyfriend. But, again, that was later on. Harriot couldn’t even get through his first point, “You gotta bring something,” without mentioning the Potato Salad Issue:

You either show up with a dish or they’re gonna look at you funny. And please don’t try no new shit like potato salad with raisins or vegetarian shish kabobs. If you can’t cook, or you don’t have all the required black seasonings, just bring some cups and napkins. Or LOTS of aluminum foil.

Then last spring, blogger Damon Young wrote an entire piece on the subject: “Why Black People Care So Damn Much about Potato Salad, Explained.”

Now we’re getting somewhere. As Young sees it, the first element in the Potato Salad Issue is the question of Who Made It. This also shows up in the memes:

The first issue here is not the taste but the safety. In another piece, “10 Things Aside from the Police that Will Definitely Kill You if You’re Black,” Young says potato salad is threat number one. Even one bite of bad potato salad “will definitely kill you.”

When it comes to potato salad, food safety is also a concern among those of us in the melanin-challenged community as well. In a 2009 NPR piece, Susan Russo tells of attending summer cookouts in New England. Every time she’d reach for the potato salad, her mother would give “the look.” Russo says, “Potato salad was the forbidden food of the cookout.” Why?

There was simply no way my mom was going to chance bringing home her brood, sick from food poisoning. How could we know, after all, how long that potato salad had been sitting in the sun? How could we be assured that it was kept cold from the time it was made? It was too risky. So we never ate it, and we traveled home safe, every time.

In my family, my Mom was the Official Potato Salad Maker. Mom was famous in the family for her candied yams and her potato salad. My kids loved her potato salad, and I have cousins who still mention it. Looking back, I’m not sure it was because Mom’s was just better, or because she didn’t trust anyone else. She had a divinely-inspired Upper Midwest Norwegian Lutheran fear of germs, and was scrupulous about keeping the bowl chilled almost to freezing, and then keeping it out of the sun once it had to go on the picnic table for just long enough to let everyone spoon a heap onto their paper plates.

The truth is that potato salad really is a frequent culprit in food poisoning, so it does need to be handled scrupulously. It’s not the mayonnaise. Commercial mayonnaise uses pasteurized eggs, free from salmonella. The problem is with the way we prepare the potatoes and eggs. In the process of boiling and then cooling, there is a potential for bacteria to grow. (The mayonnaise, if anything, may have a deterrent effect, because it’s slightly acidic.) Then, if the potato salad sits out, and warms past 40F degrees for too long, the bacteria can start multiplying rapidly.

That’s the science-y dimension. But then we want to know who made the potato salad because we also want it to taste right. Here’s where it gets sticky. Food poisoning is rooted in objective, scientific truth. But taste is, well, a matter of taste. For some, any potato salad coming from the melanin-challenged side of things is going to be suspect. Damon Young warns against a potato salad coming from your…

…white friend who invited you to his family’s 4th of July cookout and asked you to sample this new potato salad recipe he found in the backseat of an Uber last week which probably means he doesn’t want to be friends with you anymore.

We’re aware of it too. Blogger Jan Wilberg tells the story of having a professional lunch with a squad of African American women at a D.C. hotel. She describes the potato salad as “made with red potatoes, olive oil, probably shallots…with a healthy grind of fresh pepper on top.” I’m envisioning something like Bobby Flay‘s German Potato Salad: 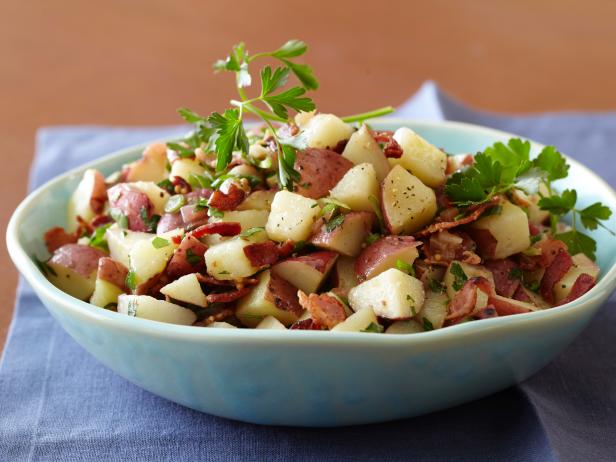 Wilberg noticed that the other women weren’t eating it. Then they started talking about it:

Wilberg’s reaction? Oh. This is basically my grandmother’s recipe for potato salad and my mother’s and mine…

And mine. I’ll freely admit that my potato salad is a work in progress. But it always comes out looking something like this most recent batch:

To me, this is potato salad. And yet, I recognize that there are all kinds of other dishes that also claim to be “potato salad.” The recipes sites are always tempting us with different kinds of potato salad, as though potato salad like mine  is simply too boring to eat. For instance, Country Living lists “25 Potato Salad Recipes That Will Be a Hit at Your Next Barbecue,” only one of which resembles my own.  Taste of Home likewise presented their Top Ten crowd-pleasing potato salads: 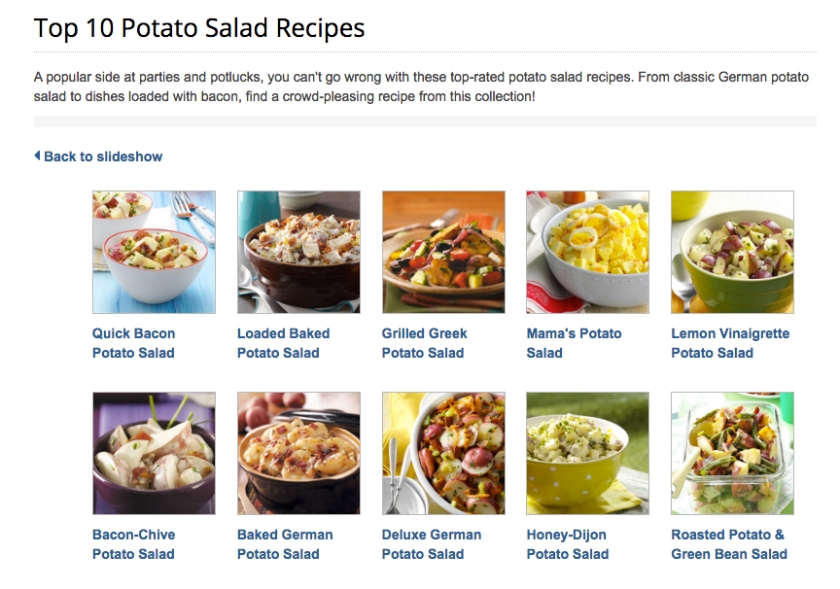 Does any of this matter? Of course not. It’s just potato salad, after all, and we’re just having fun. But if the Potato Salad Issue involves a question of expectations, then maybe there is something a bit more serious for us to consider. We’ll take that up in the next installment.

Meanwhile, I’ll keep tinkering with mine until I can wear the golden crown. 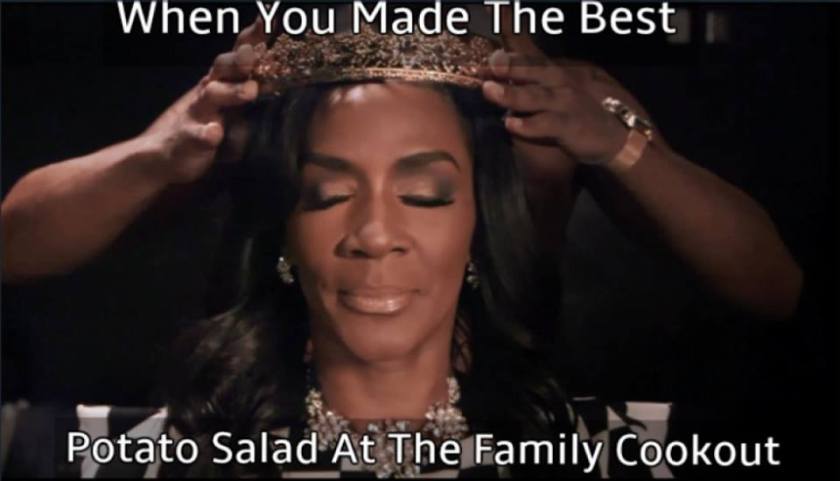 I'm an Iowa boy by choice. I love cooking and I love history, so I thought I'd put the two together. View all posts by Dan Anderson

2 thoughts on “The Potato Salad Issue”